Culture, innovation and the energy transition: three fundamental aspects of Italy come together in the new energy exhibition center that will be built in our Alessandro Volta power plant in Montalto di Castro, in the province of Viterbo.

The project, conceived by the ACPV Antonio Citterio Patricia Viel architectural firm, will be called TECCC (Center for Culture and Knowledge of the Energy Transition). Several areas will be developed: the Museum of the Energy Transition, spaces dedicated to the training and the dissemination of the energy transition, exhibition areas that will host energy-related art installations, a room for events and a panoramic terrace. "The project also includes an elevated visitor path,” explains architect Patricia Viel, co-founder of ACPV, “which runs along the perimeter of the area and will immerse the visitor in a landscape that reflects the complexity of the site."

This promises to be a true hub of innovation and sustainability that will help raise public awareness of environmental issues and increase understanding of the history of energy. “Being able to convey the past and future of energy is particularly important in a historical moment like this, in which the energy transition is radically changing the entire sector, from production to transportation to consumption, pushing towards a more sustainable model,” commented our Head of Country Italy, Nicola Lanzetta. “Doing so inside the Montalto di Castro power plant also has a symbolic value and further enriches the enhancement program of the site, which will be the largest of our integrated and multifunctional energy hubs in Italy. We’ll also be able to involve youngsters thanks to an innovative and open space.” 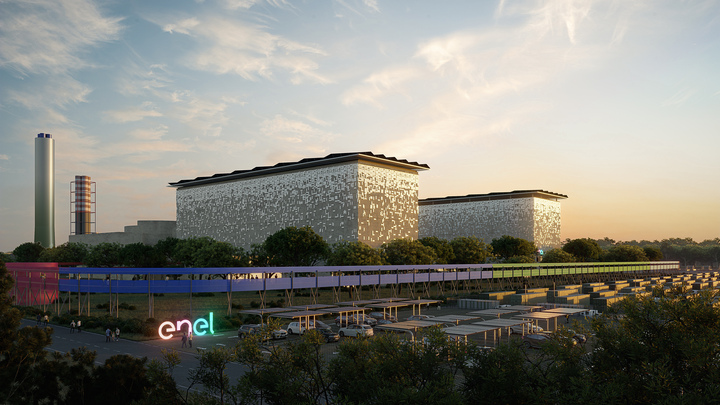 The power plant, on the other hand, is itself a cross-section of the history of energy in Italy: originally designed as a nuclear plant that never came into operation, it was then converted to thermoelectric production and became operational in 1992. Currently, the area where it’s located is at the center of an important development plan that we’re carrying out with various projects related to the energy transition, which will also include the new exhibition center: a large 10 MW photovoltaic system, energy storage systems for approximately 245 MW and a tracker factory that produces devices that allow photovoltaic panels to orient themselves and follow the sun throughout the day to maximize electricity production. In addition, spaces are dedicated to the study of further sustainable solutions, such as an innovative hydroponic greenhouse project.

“The project,” commented Sergio Caci, the mayor of Montalto di Castro, “aims to recover a disused area of historical importance for the energy narrative of the country, to tell the story of the energy transition by creating a museum and knowledge center, which has never been done before.”

The new multifunctional use of the power plant is part of our strategy to give new life to thermoelectric plants that are being decommissioned: from a circular economy perspective, the goal is to reuse the sites by choosing the most suitable solution on a case by case basis, based on the particular characteristics of each plant and taking the local area and local communities into consideration.