“Made in Italy,” the business champions of the South

A different South. In reversal of the traditional perspective, which places Southern Italy at the centre of a public debate exclusively focused on problems, the Corriere della Sera newspaper, in collaboration with the portal ItalyPost, organised a conference in Naples on 15 June. The subject was “The South is generating the Future” and Patrizia Grieco, Chairman of Enel and of the Italian Corporate Governance Committee, was one of the speakers.

The event took place in the complex of San Lorenzo Maggiore, a monumental church which is one of the oldest in the city and the entryway to subterranean Naples. As Daniele Manca, Deputy Editor of the Corriere della Sera, pointed out, the future of Italy really does depend on the South because the new socio-economic balance of Europe is being redefined in the Mediterranean area. ItalyPost mapped some 14,000 small and medium-sized enterprises (SMEs), with a turnover between €20 and €120 million, in order to identify the “Made in Italy” champions: 500 businesses with 13% average annual growth and a profitability index close to 20%. Of these, 37 are in Southern Italy, while Campania registered the highest GDP growth of all the Italian regions in 2017.

Enterprises that are small but competitive

The latest Cerved report recorded a boom in innovative enterprises, while the companies that have repositioned have grown even stronger. In analysing this data, Patrizia Grieco explained that growth in Southern Italy is taking place at a faster pace than the national average (+4.1% as opposed to 3.6%), although it generally involves small businesses. There are approximately 26,000 SMEs in Southern Italy with a collective turnover of €130 billion, employing 670,000 people: a dynamic picture that shows the ability of the area to “regenerate the future.”

“We offer ourselves as industrial partners to the businesses that enter the Enel ecosystem. We’re able to open the way forward, and to be the end point in a supply chain. We’re ready to provide the knowledge, technology and expertise necessary to accelerate the path of digital innovation and sustainable development”

– Patrizia Grieco, Chairman of Enel and of the Italian Corporate Governance Committee

With eight Innovation Hubs available, Enel can offer the best business opportunities as well as ensuring the creation of shared value.

Patrizia Grieco was also speaking in Naples in her capacity as Chairman of the Italian Corporate Governance Committee. She noted that still only a few SMEs today make use of non-banking financial resources. The companies floated on the stock market represent a mere 0.31% of the capital present in the Borsa (the Italian Stock Exchange) and there are very few highly capitalised companies (the so-called “big caps”).

Europe tackles this problem through the Capital Markets Union programme, which in May launched the first of the initiatives in the “SME Listing Package.” These propose modifications to the present European Union rules on market abuse and prospects, aiming to make the regulatory context for SMEs easier. On the Italian front, PIR - Piani Individuali di Risparmio (Individual Savings Plans) offer fiscal incentives to encourage the flow of retail capital to Italian businesses. In the first year of trial (2017), these plans raised approximately €11 billion for an overall capital of €16 billion. This also benefitted Piazza Affari (the location of the Italian Stock Exchange, in Milan), where the number of businesses floated on the Borsa increased 150% from the year before, with greater movement on lists which specialise in small and medium-sized businesses, like Star and Aim (20%). The international ELITE programme, which was launched in 2012 by the Borsa in partnership with Confindustria, accelerates the growth process and favours the international positioning of businesses through a greater use of the financial market: 520 of the 800 participants registered in April 2018 were Italian.

“Employment, young people and the human factor are the only real elements able to generate future, which means generating change. We have to work on these fronts to fight youth unemployment and consolidate a real ethical, social and business revolution that can make the most of the great patrimony we have in the South and in the entire country”

– Patrizia Grieco, Chairman of Enel and of the Italian Corporate Governance Committee

From family businesses to market leaders

The conference also credited larger enterprises for their role as springboards, assisting smaller businesses to reach leading positions in the market. Alongside the digitalisation process, which has created solutions for many transportation-related infrastructure problems in the South, well-structured supply chains have been established: Engineering and the Adler Group, for example, are enterprises that have assisted this process.

The fabric of Italy varies immensely and the South is no exception. When investment is directed towards growth and internationalisation, food, agriculture, manufacturing and pharmaceutical enterprises have developed into global level competitors. These include Antimo Caputo, which today exports flour from Naples to over 50 countries. Distilleria Fratelli Caffo, which began life in Calabria as a local business, went on to invent and launch “the iced amaro” and has even partnered with Starbucks. Essemoda, thanks to its continuous scouting of new talent, is one of the best-known brands in the footwear industry. LAER is an international point of reference for the production of technologically advanced aerospace structures, while Genetic Spa leads the way in terms of quality and the technology used to develop medicines. These enterprises show that the Southern Italian economy is by no means broken, but that it can compete at an international level, especially when positioned in a positive local environment.

Tackling the challenge of becoming competitive is, therefore, not dependent on size: it is the speed of innovation that makes the difference. If small and large domestic enterprises develop a more structured strategy to work together, Italy – which today ranks second globally in terms of the competitiveness of its production sectors – could reduce the inequality between the North and South of the country.

With an international leader like Enel, Southern Italy can look beyond the borders of the Mediterranean. 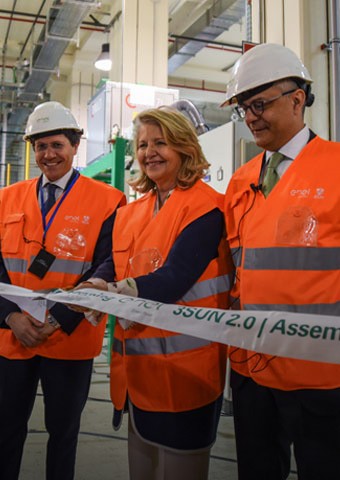 A new solar age in Catania 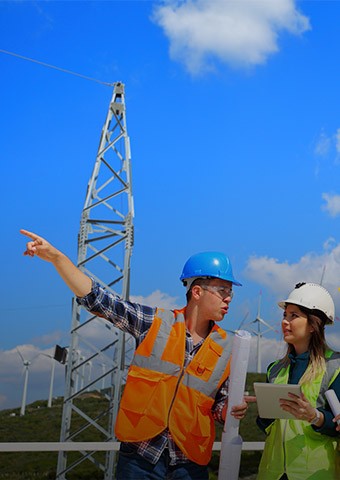 Apprenticeships, Enel is leading the way in Europe