Many familiar elements have been confirmed, there are some surprises, and an overall certainty: the Giro d’Italia will be an exciting way of showcasing the wonders of our country, not only to Italians, but to the rest of the world.

The 103rd edition of La Corsa Rosa (“the Pink Race”) was presented in Milan on 24 October. It will start on 9 May 2020 in Budapest, with the first three stages in Hungary. The finish is set for 31 May in Milan with a time trial which could decide the final outcome of the competition, as it did in 2017.

The backdrop for the 21 days of the Giro will be provided by many of the UNESCO World Heritage Sites that are so abundant in Italy, from the Duomo of Monreale to the Prosecco Hills, the Dolomites to Leonardo da Vinci’s Last Supper. And, for the first time in the Giro’s history, a stage will start inside an airbase: Rivolto in Friuli Venezia Giulia, headquarters of another great example of Italian excellence, the Air Force’s Frecce Tricolori (“Tricolour Arrows”) aerobatic display team.

“The course will be challenging but balanced, with three time trials and seven uphill finishes. The last week in the Dolomites and the Alps will be decisive, while the return of the finale to Milan will keep the race open until the last day,” explained Mauro Vegni, the Giro d’Italia’s Director, during the presentation. There are three individual time trials, six flat stages suitable for sprinters, seven of medium difficulty and five high difficulty mountain stages. After Hungary, the race will travel to Italy, specifically Sicily, where it will climb Mount Etna before crossing to the mainland, first Calabria and then Basilicata, prior to reaching the stunning terrace of Vieste in Apulia. The race will then head up the Adriatic coastline to Emilia Romagna in an homage to the late Marco Pantani, with a start and finish in Cesenatico. It will then proceed to the Veneto region where a time trial will celebrate the Prosecco Hills of Conegliano and Valdobbiadene, which was recently named a UNESCO World Heritage Site. The last week will take place in the Friuli Venezia Giulia and Trentino-Alto Adige regions with the Cima Coppi (the highest point of the race) on the 2,758 m of the Passo dello Stelvio, followed by Piedmont, and Lombardy, where an individual time trial stage will take the riders from Cernusco sul Naviglio to Piazza Duomo in Milan. Here the winner will be crowned. 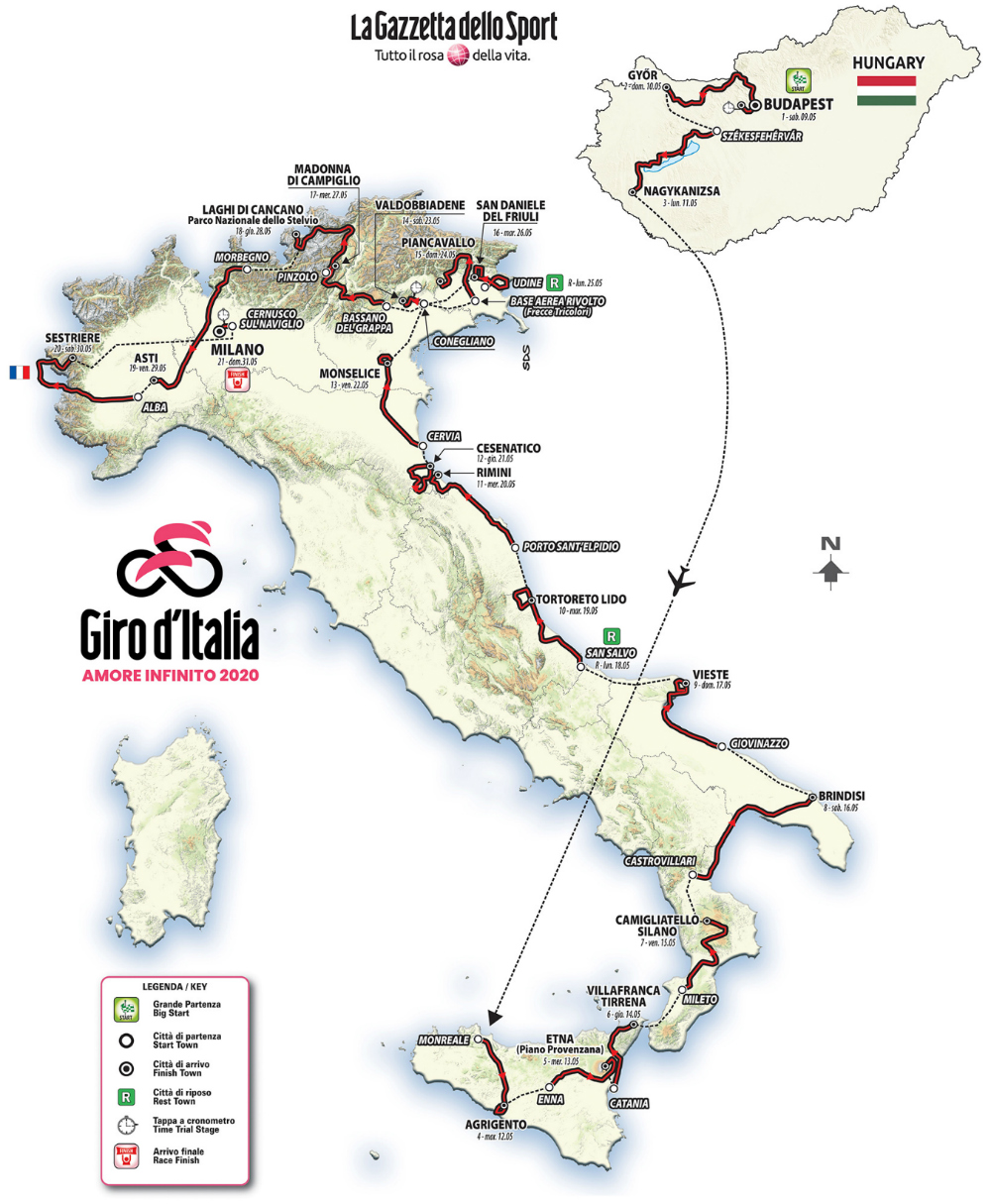 The Giro d’Italia has been uniting Italy for over 100 years and “goes beyond the sporting event” as it broadcasts live to 198 countries worldwide “images of the wonderful places that we encounter along the route,” said Paolo Bellino, Director General and CEO of RCS Sport. The Pink Race is an event that targets an increasingly international audience: the opening stage in Hungary will be the 14th time the Giro has started abroad, and the first time in an Eastern European country. “The Giro belongs to everyone and we’re proud of the fact that so many countries want to host the start,” explained Urbano Cairo, the RCS MediaGroup’s President and CEO.

“We are sure – Bellino continued – that, thanks to the support of all our partners – institutions, sponsors and the media – the next Giro d’Italia will be an unmissable event.” And for the fourth year running, we will be alongside the Maglia Rosa (the Pink Jersey), symbol of the Giro and the values we have always shared with the race: the link with local communities, respect for the environment, sustainability, the energy of the riders and their ability to work as a team.

“The Giro d’Italia is part of Italy’s history and culture. It is an endless source of memories, stories and a passion that has divided the country into factions of supporters in a healthy and fun way. At the same time it has unified our country, thanks to great champions and the nation’s love of cycling.” This was the definition provided by Italy’s Sports Minister Vincenzo Spadafora, who attended the presentation where significant technological innovations were also announced, as were the collateral events that enrich the race: Biciscuola, the educational project involving 50,000 primary school children; Ride Green, the waste differentiation project that aims to recycle 92% of the refuse produced, and Giro E, the first race in stages for pedal assist bicycles in the world, sponsored by Enel X.