“Happy is he who gets to know the reasons for things”. The poet Virgil’s famous quotation provided the leitmotif for the 13th edition of the National Geographic Science Festival staged between April 16 and 22 in partnership with Enel Green Power.

Over 340 events took place in the Parco della Music Auditorium and the capital’s 24 libraries, in addition to more than 200 children’s workshops with internationally renowned scientists, philosophers, experts, researchers and artists together with students and citizens to debate the “Reasons for Things” . From AI to time travel, robotics, health technologies, creativity, protecting our artistic heritage and even astrophysics, the latest cutting-edge studies can help us to reflect on and understand one of the most important concepts in human activity:  the relationship between cause and effect.

But the real focus of the festival was on the issues of environmental protection and safeguarding our oceans from plastic pollution, the central themes also of the 48th Earth Day, celebrated on April 22 at the end of the week. Of great symbolic importance was Plasticus, an installation in the Auditorium that featured a giant whale made entirely of PVC bottle caps, fishing nets and bottles. Plasticus weighed 250 kg, the exact amount of waste dumped in the sea every second.

At the heart of the event was our ecosystem, which was described as a process inside of which various forces must attain a reciprocal balance: upsetting that balance incurs consequences, the impact of which is impossible to predict in the long term, and puts the survival of the human race itself at risk. As Marco Cattaneo, editor of Le Scienze and National Geographic Magazine Italia, stressed during the concluding panel discussion of the Festival, man is now both the main cause of the problem and also the possible solution.

Sustainability concerns us all

The circular economy as a development choice for the human race was one of the central themes of the Festival from its first day on April 16.  Carlo Alberto Pratesi, professor of Economics and Business Management at the Roma Tre University, chaired the meeting on the Circular Economy, immediately putting the concept of sustainability at the centre of the discussion. The term is also pivotal to our Group strategy that supports the adoption of a circular economy model and the transition to renewables. Pratesi maintains that renewable production can open up new opportunities in other sectors of the economy, such as food, in which Italy plays a benchmark role internationally. A good example is our “Smart Agriculture” project, which is the result of a partnership with Bonifiche Ferraresi, that focuses on using renewable sources and electric vehicles to bring Italy’s largest agricultural company closer to the zero impact threshold.

“Everything we take from the Earth, we have to give back. We have to learn to move within this circularity in the future, adopting sustainability as our basic principle. If we don’t turn our backs on the current economic model, there won’t be any future for us”

– Alberto Pratesi, professor of economics at the Roma Tre University

There was great emphasis on plastic pollution, the scale and impact of which is still underestimated by the public. One of the most authoritative speakers was oceanographer Sylvia Earle, founder of Mission Blue, SEAlliance and Deep Ocean Exploration. “Her Deepness”, as she was nicknamed by the New York Times, was the guest speaker at the “Save the Oceans” and “Ocean Rescue for a better future” conferences.

Despite the fact that our seas and oceans are invaded by over 8 million tonnes of waste plastic every single year, running the risk that there will be more plastic than fish in the marine environment by 2050, Sylvia Earle was also at pains to emphasise the huge opportunity for the up-and-coming generations: there is now a much greater awareness of the importance of biodiversity and the currents as stabilising factors in landmass climate and this is pushing us to act personally to protect the ecosystem.

The Science Festival also promoted the  #PassOnPlastic campaign, which invites those who sign up not just to stop using plastic in day-to-day life but also encourages research into intelligent solutions to replace it forever. Protecting our oceans is also one of Enel’s goals as it is involved in researching innovative ways to harness the power of the sea to generate clean energy.

From the oceans to the mountains

Andrea Fantini, skipper of the eco-powered Class 40 Enel Green Power,the craft for which EGP is Innovation Partner, also provided a memorable first-hand account of the scenario today. At the Festival’s closing event, the Italian yachtsman related how he was forced to pull out of the last edition of the Transat Jacques Vabre after his boat collided with UFOs (unidentified floating objects) off the Portuguese coast. Although the impacts damaged her engine, the Class 40 Enel Green Power will return to competition this year, as an example to the world of the potential of zero emissions sailing in which technology is used also to foster sustainability.

“In 2015, we beat the San Francisco to Shanghai speed record,” declared the yachtsman. “And during the entire crossing – around 7,000 nautical miles which we did in 25 days – not a single day went by when we didn’t see or hit plastic of all kinds. It is an enormous problem at all latitudes.”

“The time for action has come. During our crossings, we only use wind and solar energy, and we eliminate anything superfluous. It’s a simple way of living that could be adopted in everyday life too. An example to raise awareness and make people realise that it is possible to change, starting with the youngest of children”

Another project that was part of the Festival programme and also supported by EGP is Fabiano Ventura’s photographic exhibition “In the Footsteps of the Glaciers – In Search of the Past for a Sustainable Future ”.

Ventura reveals the impact of climate change through a series of photographs shot on the world’s highest peaks: the shrinking of the glaciers is documented by comparing prints made by the early explorers with those of the present day shot by expeditions organised every two years (Karakorum 2009, the Caucasus 2011, Alaska 2013, the Andes 2016). The fifth began on April 20 and will take in Mount Everest (8,848 m), Kangchenjunga (8,586 m) and Cho Oyu (8,201 m) in the Himalayas.

“The comparative photography project on the disappearance of the glaciers is being developed to highlight a theme that we feel is fundamental to understanding sustainability. Aside from expeditions for scientific monitoring purposes, we are organising events and exhibitions to raise ecological awareness”

The exhibition will run in the Auditorium until June 8, allowing director Federico Santini to shoot video footage for a documentary on the story of climbers of the past and also experiences in the field. A satellite link to the project site will also allow the expedition results to be tracked in real time.

The Department of Earth Sciences at the University of Milan will also study the mass of the glaciers visited by Ventura’s team using remote sensing. The final readings will be taken in 2020 when the group travels to the Alps.

While searching for the reasons why remains a mystery to humankind, we are also seeing the impacts of our actions on the Earth with our own eyes. We can and must change and Enel is already headed in this new direction. 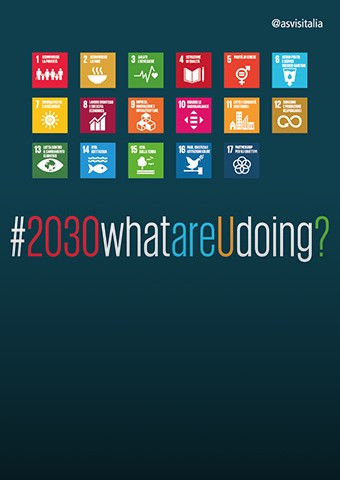