The youngsters and the mine

They come from Argentina, China, Columbia, Denmark, Ecuador, Ethiopia, India, Iran, Italy, Kosovo, Peru, Poland, Russia, Turkey and Venezuela. To them, the world is becoming more and more connected. It is shrinking in size but growing in opportunities. They talk and chat with friends and co-workers all over the globe and order a taxi or dinner with a tap of their smartphone screen.  The electric cars previous generations could only read about in science fiction stories are part of their everyday lives and the energy powering them is getting cleaner with each passing day.

It’s hard to believe, but you may well come across them in a mining district in Cavriglia, in Valdarno. The 1,600-hectare former Santa Barbara mine once supplied the lignite (brown coal) to help power the development of an energy-hungry nation. Since the mine closed down, the huge site has been reclaimed by nature. Just a few remaining hints of its industrial past can be seen from its dirt roads – old heavy machinery and vehicles so colossal that the only way to move them is to dismantle them and shift one piece at a time.

And yet the 60 international students of architecture and urban planning from the Milan Polytechnic and the University of Florence mentioned above have been spending time at the site in order to help write a new chapter in the life of this area. In October 2017, they spent four days in Cavriglia, doing preliminary site inspections, touring the site with guides, studying the details and exploring planning possibilities in order to be able to design the future of the former Santa Barbara mine. The site is owned by Enel Produzione and is part of the Futur-e project that aims to bring new life to decommissioned industrial areas using sustainable solutions.

“Santa Barbara is the first application of Futur-e to an area that is not a power station. This is an enormous space larger than all of the electricity generation sites in the project put together. This is also partly why we and the Milan Polytechnic chose to work out potential spatial strategies and development scenarios for the site in advance, together with representatives of the local area, in order to provide a solid basis for our search for projects and investors”

The area was already at the centre of a reclaim and repurposing project, which, thanks to the collaboration of the Tuscany Regional administration, the local municipalities and the company, is one of the Italy’s largest environmental renewal plans.

The lignite mined at Santa Barbara was used to generate energy for almost a century. From 1907 to 1944, it fuelled the Castelnuovo dei Sabbino power station owned first by SMEV (Valdarno Mining and Electricity Company) and then SEV (the Valdarno Electricity Company), which was destroyed by bombs during the Second World War. At that time, lignite was extracted in small mines on outcrop banks and then later using underground shafts. From 1956 to 1994, however, open-cast mining was used to supply the Santa Barbara Thermoelectric Power Station which was specifically built at the mouth of the mine by the private company “Santa Barbara, Società per l’industria mineraria ed elettrica” (Santa Barbara Company for the Mining Industry and Electricity), which in 1969 merged with Enel, then Italy’s National Electricity Generation Body. The power station, which was converted several years ago to a modern combined-cycle facility, is still operating even though the whole mining story now seems to belong to a bygone era.

The young researchers had the opportunity to really get to know the area first-hand, thanks to the likes of the Mine Museum that celebrates its heritage. “Being able to see these places with their own eyes will definitely be of help to the researchers,” commented the Mayor of Cavriglia Leonardo Degl’innocenti O Sanni, who accompanied them on their visit. “Through their work, they will be able to bring about a pivotal shift in the requalification and recovery process that the Santa Barbara mining district has been waiting for since the mid 1990s.” The Mine Museum hosted an exhibition showcasing the youngsters’ research projects – they had been asked to develop scenarios for the future of the former mining area based on three working hypotheses established through a consultation process with stakeholders from the area: a cycling tourism park, agricultural and art park, and innovative production activities and geological research.

The Futur-e project for Santa Barbara, which will be integrated with existing projects in the area, was launched in 2017 with a consultation plan for the area, interviews and workshops. Now all is set for the regeneration process to start in earnest: an initial project competition will be launched in 2019 which will focus on several units in the zone and the areas of intervention set out in a master plan that provides the guidelines for the repurposing of the entire area.

In the build-up to the competition, which will then turn ideas into reality, one of the scenarios has already been trialled virtually thanks to the collaboration between Enel Produzione and the organisers of Marzocchina, a vintage bike race that sees cyclists travel through the historic town centres and countryside of Valdarno. In 2018, this two-wheeled journey back through time also included an exclusive 19-kilometre stretch of closed-off white gravel road through the mining district. Past and future continue to come together in the mine, however: in January 2019, a group of graduate students from an industrial zone regeneration course run by the New York Institute of Technology’s School of Architecture will be visiting some of the Futur-e sites and the Santa Barbara area has been selected for inclusion.

Industrial heritage, a testament to history for the new generations, a tourist trail, thesis subjects, regeneration scenarios and projects: these are just some examples of how this area in Santa Barbara is becoming a real mine of opportunities. 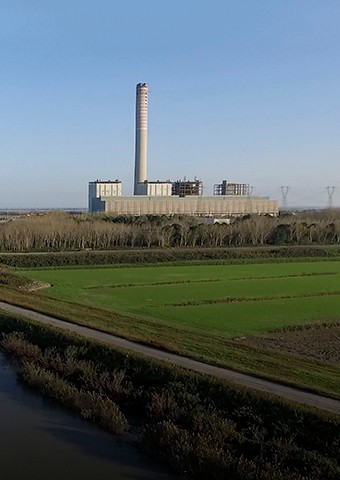