At Montalto di Castro in search of the future

“This is an extraordinary area, where something new and different can take shape”, says Belinda, a 21-year-old from New York. She had never set eyes on a place like the Alessandro Volta power station in Montalto di Castro before.

For months she has been studying photos, maps,  documents and plans of the facilities alongside other young students at the New York Institute of Technology (NYIT) in New York, but seeing the “energy citadel” in Italy’s Lazio region with her own eyes was a new experience – the sea on one side, the Via Aurelia on the other, and in the middle the imposing structures of the most powerful “energy factory” ever to come on-stream in Italy.

The site covers over 200 hectares with roads, offices, control centres and machine halls, chimneys, turbines and production units, reflecting the range of technologies that tell the story of Italy’s energy industry up to the present day. But times have changed and a model based on the increasing use of renewables has rendered thermoelectric installations obsolete. This industrial heritage must now be totally repurposed. “We’d like these young people to be given an education that’s increasingly based on conversion projects for existing structures, and we’d like them to understand the ecostructure that hosts these installations,” says professor Beyhan Karahan of the NYIT School of Architecture. Together with her colleague Giovanni Santamaria, she is running a degree course on the redevelopment of decommissioned industrial complexes.

Futur-e’s experience is at the centre of the NYIT course’s syllabus. In January a group of students visited five sites included in the programme through which Enel Produzione intends to give new life to industrial areas that have outlived their usefulness on the energy scene, and which can be converted to a new use. One such site is the Alessandro Volta power station at Montalto di Castro. Over the next few months each student will prepare a paper on a power plant’s regional setting, examining its development potential and the economic and environmental effects on local communities and presenting practical proposals for the site’s future. Their work will be included in their architectural theses.

“A process where you learn not only how to plan from a blank sheet, but also how to rethink what has already been built in a holistic circular economy approach which integrates the redevelopment of the spaces with the local ecology”

The challenge set by NYIT for its students is similar to Enel Produzione’s call to investors, developers and planners in 2016, when the company launched an international “Project Competition.” This was open to anyone seeking to submit redevelopment proposals for the site based on the principles of sustainability and the circular economy.

One of the proposals was from Studio Amati, an architectural and engineering company with a vast range of experience in the redevelopment and repurposing of urban settings, including the creation of tourist-oriented facilities. The studio’s entry was the “Marina della Tuscia” project. Enel Produzione has signed a letter of intent with Studio Amati Architetti to verify that the necessary conditions and requirements for a preliminary contract of sale for the entire site are all fulfilled. The project has already attracted the attention of a number of national and international investors, centres of entrepreneurial excellence and leading companies in the sectors that will be involved in redeveloping the site, from tourist facilities to shipbuilding, commerce and construction.

In the proposal the seawater supply channel, which is needed for the plant to function correctly, will be adapted to become a link between the Tyrrhenian Sea and a lake within the site. The structure that was originally intended to host the nuclear plant in the first power station (but was never used) will become a commercial area, while the highest chimney, which served the steam turbines, will be transformed into an innovative space for screenings and artistic events. The proposal aims to convert spaces and structures once used to generate energy into a new innovative urban hub, leveraging Montalto di Castro’s strategic position to create Viterbo’s first nautical district.

Montalto di Castro’s mayor, Sergio Caci, has followed the research and selection process for the project and is a member of the competition jury. For him, “This proposal is clear example of the circular economy, an authentic case of urban regeneration and transformation of an industrial area. We’re now working to transform this dream into reality.”

And, talking of turning dreams into reality, while Enel Produzione and Studio Amati are now directing their efforts towards achieving this, the kids from NYIT have returned to New York, where they will present their theses in May. And who knows, in a world that’s placing increasing emphasis on sustainability and the redevelopment of decommissioned industrial areas, the experience of the tour of Futur-e sites could be one of the keys to the future for these young designers and architects of tomorrow. 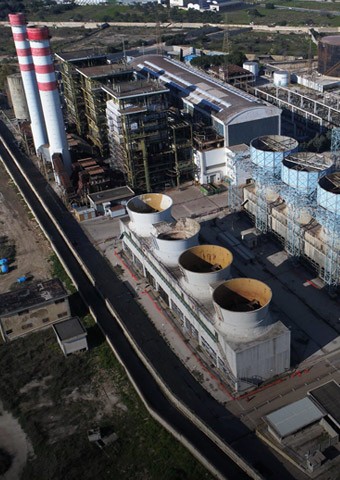