Lighting up Assisi with the magic of Christmas

Assisi will be adorned with lights, transforming itself into a huge open-air nativity scene for a second year. From December 8 to January 10, the city will put on a spectacular light show, visible even from the valley below, especially at dusk, when the churches, homes and buildings that symbolize Assisi, a Unesco World Heritage site, will be lit up in the pastel shades of Giotto’s frescoes in the Basilica of Saint Francis. It’s an awe-inspiring sight that continues to amaze once you enter the historic center, with the piazzas and monuments enhanced by scenic lighting: the cornerstone of a multimedia project supported by our Group that uses Enel X technology to evoke the magic of Christmas. “An extraordinary project that leads visitors along an immersive path,” is how it was defined by Father Enzo Fortunato, Head of the Press Office at the Sacred Convent of Assisi: a journey of light and color along the walls and streets of this beautiful Umbrian city.

“Saint Francis spoke of Christmas as the holiday of holidays and, thanks to Sister Technology, we are sending out a message that is both human and symbolic, because all of us are seeking the light and as long as we continue to nurture this sense of light within ourselves, life will always have the beginning of a sunny new day.”

– Father Enzo Fortunato, Head of the Press Office at the Sacred Convent of Assisi

The Nativity Scene of Light is spread across the whole historic center of Assisi, from the Cathedral of San Rufino to the Basilica of Saint Francis, passing through the public squares of the municipality and – this year for the first time – including the Basilica of Saint Clare and Saint Peter’s Abbey. Adding to the multimedia video projections are 100 life-sized statues – double the number of the 2020 edition – scattered along the city’s the lanes and squares.

The artistic project, which we are supporting again this year, was made possible thanks to the technology of Enel X, which has produced a cutting-edge architectural and scenic illumination that pays homage to the works of the great Tuscan artist Giotto, using light to interpret and enhance the area, explains the project’s curator Carlos Dodero, Head of architectural lighting at Enel X. “Il Natale di Francesco” (The Christmas of St. Francis) was conceived during working discussions with Father Enzo Fortunato. We posed the question of how to represent Christmas and we found the answer in Giotto’s frescoes,” continues Dodero, “so we chose four symbolic paintings in the Lower Basilica and we recreated and adapted them for projection onto the façades of churches around Assisi.”

“Saint Francis was one of the first environmentalists in history, as we can see from his Canticle of the Creatures. In line with his message of protecting the environment, we’ve used sustainable technologies that reproduce Giotto’s paintings while respecting their authenticity and without impinging on the architecture of the city.”

A project that involves the whole city

The initiative will be inaugurated at 6:30 pm on Wednesday December 8, after the mass at the Sacred Convent to celebrate the Immaculate Conception. At the same time, the lights on the Christmas tree in Piazza San Francesco will be turned on, there will be a blessing of the nativity scene, the lights in the historic center and the other parts of the city will be turned on and it will be possible to admire the video mapping on the most important monuments and various private buildings. Until January 10, everyone will be able to enjoy an immersive experience and feel a part of the over 10 thousand square meters of frescoes which are the pride of the Umbrian city.

Illuminating the façade of the bell tower of the Cathedral of San Rufino will be a projection of The Annunciation through the mapped illumination of the surface and a graphic adaptation of Giotto’s fresco.

On the façade of the Upper Basilica of Saint Francis will be a reproduction of the symbolic image of Christmas: The Nativity of Jesus, renewing the profound connection between Saint Francis and the live nativity scene he created in Greccio in 1223.

And then the coup de théâtre: the “Glass Basilica”. Every half hour, from 5pm to 10pm, the Nativity scene will disappear to make space for video mapping on the façade of the Upper Basilica that will enable visitors to see the inside of the monument complex with its frescoes even when the Basilica is closed and to be immersed in a stirring narration evoking the Christmas of Saint Francis.

Finally, the new features this year are the Basilica of Saint Clare, whose façade will be embellished by a graphic adaption of Giotto’s Visitation, and Saint Peter’s Abbey, on which will be projected the image of The Adoration of the Magi.

All of the sites involved are connected by a path dotted with glowing stars projected onto the ground, inspired by those depicted in the Basilica of Saint Francis.

A Christmas of light across the country

Our commitment for Christmas 2021 does not end here because there will also be light shows taking place in other locations around Italy. Starting in Venaria Reale, just outside Turin, we are involved in the “Fiabe d’artista” (artistic fairy tales) project. From December 8 to January 7, video mapping of the Palace will be integrated with a video produced by cartoonist Andrea Scoppetta, whose artistic images will also be projected in Piazza Vittorio Veneto and in Piazza Annunziata.

A whole series of initiatives that use light and color to exalt the shape and beauty of historic buildings, public squares, churches, monuments, artistic heritage sites and architectural spaces, confirming our commitment to valuing and enhancing Italy’s cultural heritage. 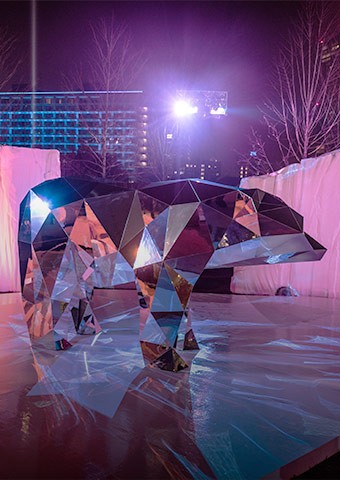 ILLUMINA, a new story of light and nature in the heart of Milan 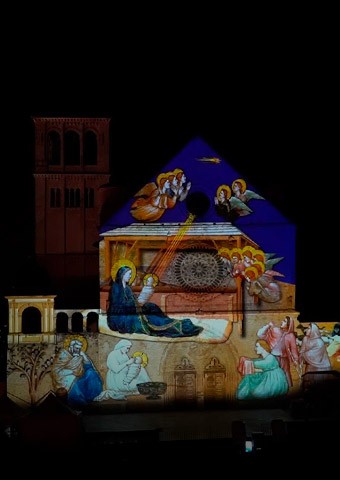 Christmas in Assisi, a story of light and humanity