Light Cycles is the new urban art project by the visionary Arthur Duff celebrating our 60th anniversary during the 105th Giro d’Italia: a luminous journey that, just like the historical Pink Race, traveled across the Italian peninsula, passing through some of the cities hosting the 2022 Giro – starting from Catania, making its way up to Naples, Parma and Turin, and ending with a final stage in Verona.

For Duff, light is a metaphor for movement, for a journey in the world of knowledge like the one offered by Light Cycles: luminous words take shape and move across the façades of monuments and buildings in the selected locations, which were conceived as parts of a single project, adding new and more evocative depth to their interpretation and enjoyment.

“Start”, “Beginnings”, “Light”, “Cycles”, “Corsa Terrena”, “Viva”, “Power” are some of the expressions, drawn from the world of energy and circularity, that the artist chose for this project. “His laser projections are like pulses of an image, weaving words that alternate and overlap with a sometimes hypnotic rhythm, speed, circularity and unpredictable pauses,” curator Valentina Ciarallo explains. The flow of words, with their multiple meanings, invites free personal interpretation; they are modulated in a different way at each stage, allowing the artwork to be different and original each time.

It all makes for a serial story that had its “introduction” in Rome, during the evening dedicated to the presentation of the special edition of the Maglia Rosa jersey for our 60th anniversary on April 6 at MAXXI, and will conclude with the last stage in Verona on May 29, where the artwork will reach its fullest and most majestic form. “Words are the energy of life,” comments Cecilia Ferranti, Head of Communication Italy. “With these light installations, we want to express our close affinity with the territory and the values of the Giro d’Italia, and celebrate 60 years of future and energy through art and light.”

Born in Germany to American parents in 1973, Arthur Duff later moved to Italy. He is a professor at the Academy of Fine Arts in Venice, Boston University and the Perugia Academy, where he holds classes on painting, sculpture, design and multimedia installations. For some time, his work has focused on the physical aspect of thought – the written word – through the use of different techniques and materials, in particular neon lights and laser projections, in order to create a new narrative of space. 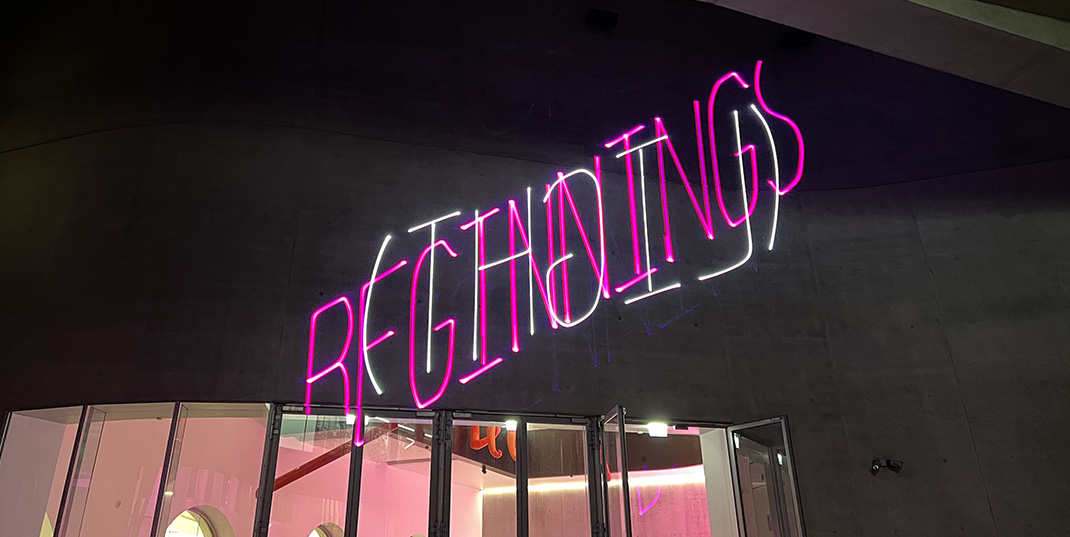 An evocative light installation designed for the evening of the presentation of the Enel 60 special edition Maglia Rosa was projected on the façade of the MAXXI in Rome, inaugurating the journey of this “art race” that traveled parallel to the 105th Giro d’Italia.

Light Cycles’s journey of light, with its laser projections, started in Catania, the first stage of the 105th Giro d’Italia. The façade of the Palazzo del Municipio, also known as Palazzo degli Elefanti, temporarily became the physical and temporal space for dialogue using a new kind of writing with light. 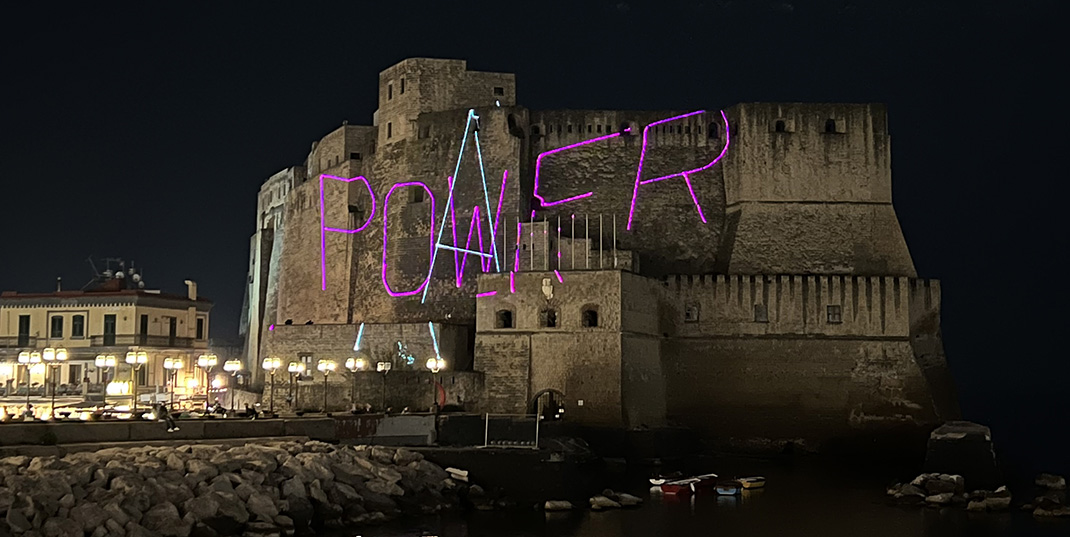 “Power”, “Start”, “On”, “Light”, “Viva”, “Tempo”, “Fuga” are some of the “statements” that make up the glossary of Light Cycles conceived by Duff. For the Naples stage, the words took shape on the bastions of the city’s oldest castle, Castel dell'Ovo. 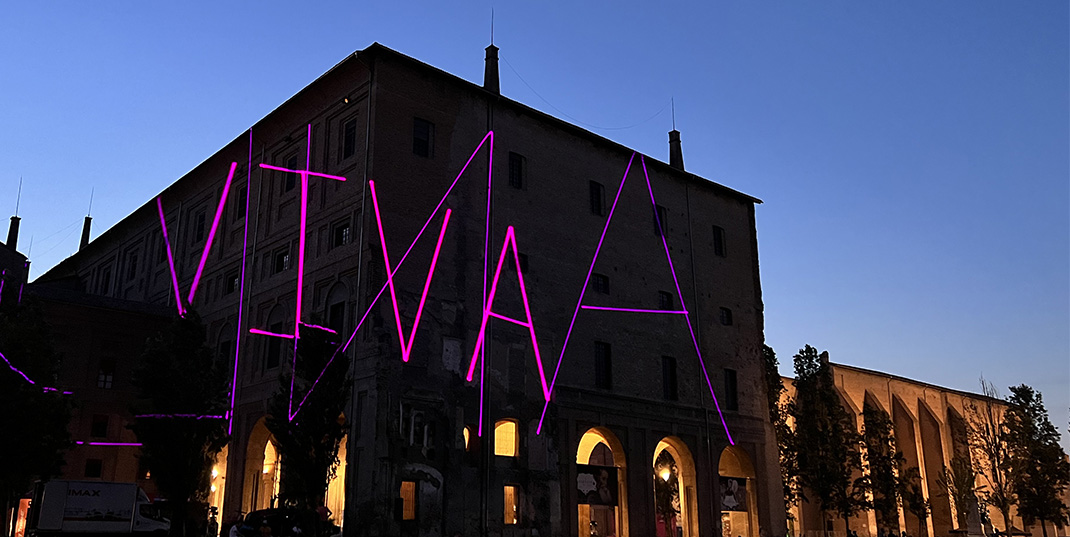 In Parma, streams of luminous words lit up the Palazzo della Pilotta, symbol of the ducal power of the Farnese family during the Renaissance. For the occasion, Duff used the corner of the complex, creating an evocative combination of phrases on a monumental scale. 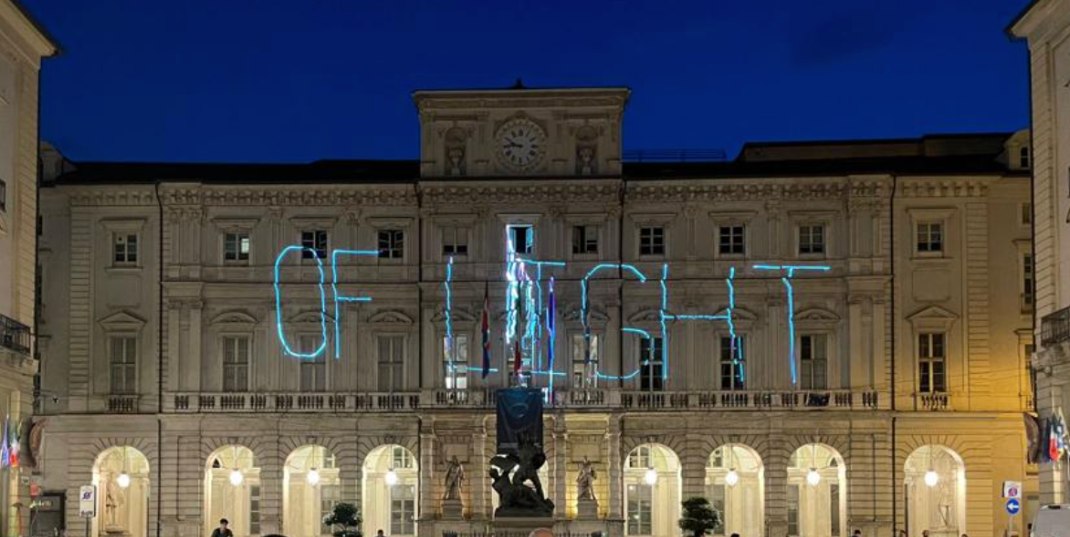 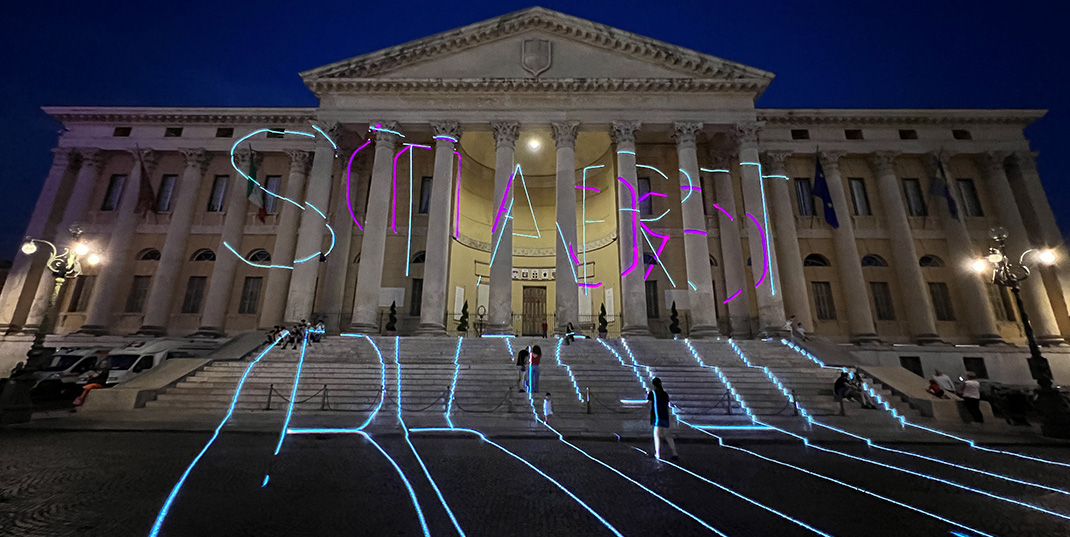 The last stop for Light Cycles. The rhythm of the statements Duff composed reached its fullest complexity for the grand finale in the city of Verona, in parallel with the finish line of the 105th Giro d’Italia. The narrative branched out on multiple planes and at different speeds through the use of a third projector. The light tracks etched the façade of Palazzo Barbieri in Piazza Bra, echoing the sequence of the neoclassical colonnade.